What Manner of Person Art Thou? 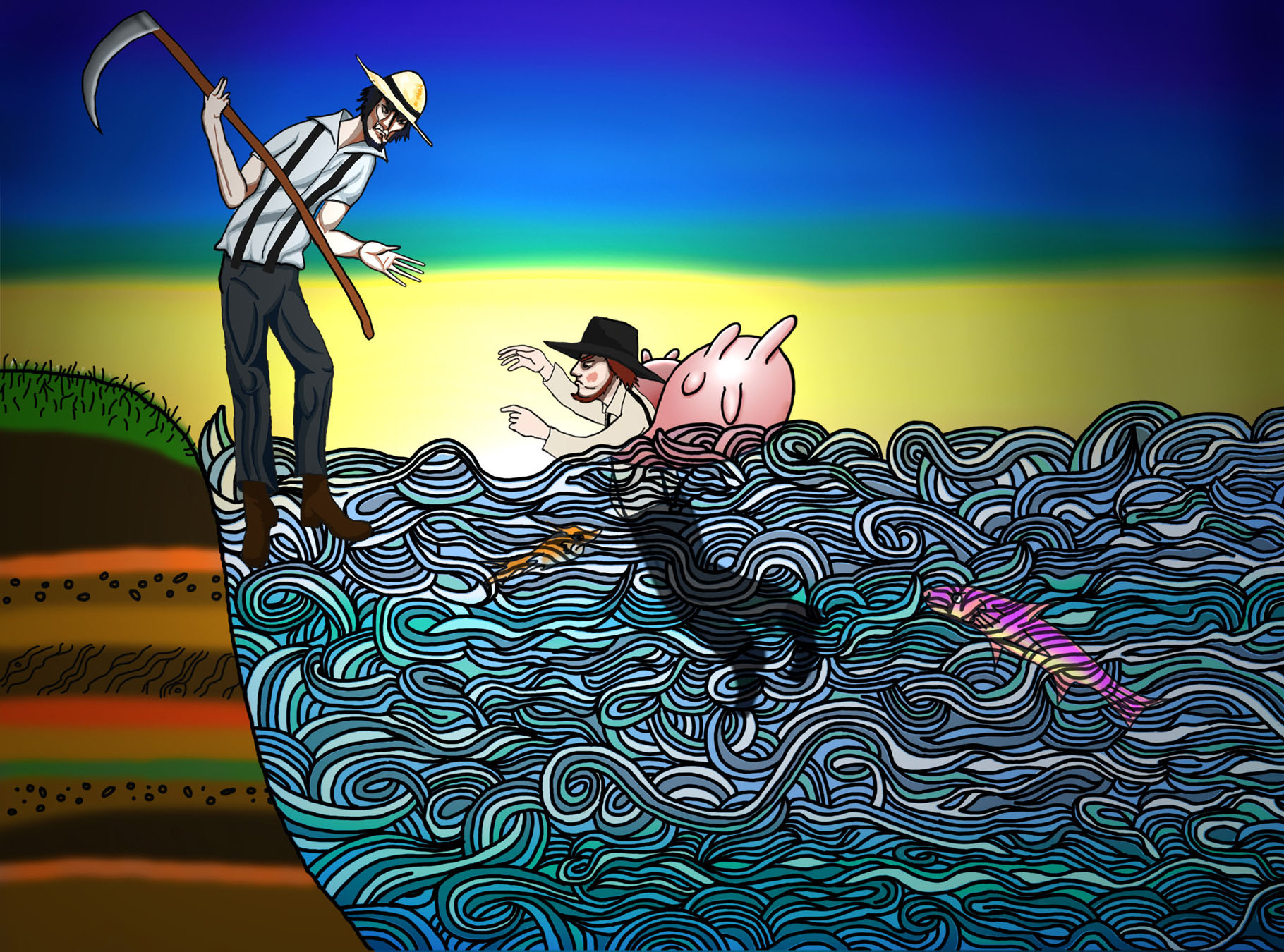 What Manner of Person Art Thou? is an exhibition of Erin Cosgrove ’s animated work of the same title. Structured around the seven deadly sins and inspired by the 11th century Bayeaux Tapestry, What Manner of Person Art Thou? is a 65-minute animated video that relates the twisted tale of two anachronistic believers who mete out punishment to those they deem to be evil. It darkly allegorizes the hazards of morality and the corruption of modern life. Erin Cosgrove is an artist and writer who uses video, animation, books, painting, scrolls, timelines, installation, and performance.

In her description of the piece, the artist wrote, “Identifying with angels of death, Yoder and Troyer wander the U.S. and dispense violent justice on those they perceive to be evil-doers. Within this black comedy structure, they act as a well-intentioned, but ultimately bungling, conscience for our times. As a satire on the corruptibility of faith, Yoder and Troyer ’s tale is meant to invoke Francisco Goya ’s caution in Los Caprichos, ‘The sleep of reason produces monsters. ’”

What Manner of Person Art Thou? is presented concurrently with Designing Egos
and John’s Luv.

What Manner of Person Art Thou? is supported by the Andy Warhol Foundation for the Visual Arts; the College of Architecture and the Arts, University of Illinois at Chicago; and a grant from the Illinois Arts Council, a state agency.

What Manner of Person Art Thou?

What Manner of Person Art Thou? is a 65-minute animated video that relates the twisted tale of Elijah Yoder and Enoch Troyer.

Their story begins when a mysterious set of incidents, including ergot poisoning (a lethal rye fungus and the base ingredient of LSD), obliterates the population of two small, adjacent colonies somewhere in the U.S., leaving behind only two survivors: Brother Yoder and Brother Troyer. Because the completely isolated colonies ’ manner of living hasn ’t changed much since the 17th century, it isn ’t until they leave the only home they ’ve ever known in search of their fallen brethren that we realize their tale is set in the present day.

Yoder and Troyer fail to adapt to the confounding ways of the 21st century, and it is from their viewpoint (archaically spiritual and warped from their trauma and the lingering psychotropic effects of ergotism) that we encounter contemporary life and its vices.

Identifying with angels of death, Yoder and Troyer wander the U.S. and dispense violent justice on those they perceive to be evil-doers. Within this black comedy structure, they act as a well-intentioned, but ultimately bungling, conscience for our times. As a satire on the corruptibility of faith, Yoder and Troyer ’s tale is meant to invoke Francisco Goya ’s caution in Los Caprichos, “The sleep of reason produces monsters.”

The visual style of the video is inspired by the Bayeux Tapestry (an 80 meter embroidery narrative of the Battle of Hastings, circa 1066) and other medieval artworks. The lettering is an update of the Latin scattered about the Bayeux Tapestry. Instead of using a dead language that few understand, I use an ultra contemporary language that few understand: “leet.” Leet, or 1337, is an elite computer language used by the young and silly or the old and nerdy. This mixture of current (digital video/leet) and medieval mediums is iconographic of the medieval/anti-humanistic thinking prevalent today.

Excerpt from Blood and Irony, written to accompany the 2008 exhibition of What Manner of Person Art Thou? at the Hammer Museum, Los Angeles

…Umberto Eco has spoken of the return of the Middle Ages: of modern gated communities as medieval walled towns. In What Manner of Person Art Thou? Cosgrove makes the return of the Middle Ages literal. By an elegant device—disease ravages an isolated fundamentalist community that has utterly rejected modernity—she releases two survivors of the Middle Ages into modern America. Elijah and Enoch ’s ferocious, unironic version of reality collides again and again with our mediated, ironized version. There is blood. Blood, and irony. ??One expects jokes at the expense of an old religion that has lost its power. But Cosgrove takes the braver path and shows the deep inadequacy of the modern secular religions that have replaced Christianity in the West. A religious life—after Nietzsche, Darwin, Einstein, genetics, quantum physics, the death of God—can be empty, but not as empty as a life lived in pursuit of money, celebrity, or World of Warcraft experience points.??

Cosgrove ’s way of working is appropriately medieval, too. What Manner of Person Art Thou? was lovingly animated by a single hand, over many years, just as medieval manuscripts were copied and illustrated, page by page, with great love. Cosgrove ’s imagery, too, draws heavily from medieval manuscripts, pictorial tapestries, and the woodcuts illustrating the earliest religious printed books.??..

But, though Cosgrove is a heretic, her conclusion is one that would meet with the approval of Saul of Tarsus, who hunted and killed Christians before becoming Saint Paul. Like Paul, Elijah and Enoch find their view of the world in collision with others ’ view of the world. They solve the problem in a style that has become familiar: by chopping off the heads containing the alternative point of view. But finally from deep within their own bodies rises a yearning strong enough to smash the rigid shell of their own worldview, from the only direction in which it is vulnerable, the inside.??

By smashing all these deluded realities, you could say that Erin Cosgrove is arguing for the idea that Parmenides came up with, five hundred years before Christ ’s birth, and on which science is based: reality is not that which we experience.?? But it is a strength of her surprisingly, pleasingly ambiguous work that you could also argue that she strips away the rigid, often intolerant shell of Christianity only in order to reveal its precious core. Its bleeding, sacred heart. She is agreeing with both Jesus and Krazy Kat—when science has stripped away everything, the one thing left that is powerful and true, that survives being explained in terms of chemistry, survives being understood in terms of genes, that can still overwhelm us, dissolve our brittle self, connect us to the universe…is love.

Erin Cosgrove, What Manner of Person Art Thou?, April, 2010.

These essays were distributed in the gallery during the run of the exhibition.

Erin Cosgrove (born 1969) is an artist based in Los Angeles whose work has been exhibited internationally, including at Hammer Museum, Los Angeles; Brooklyn Museum of Art, New York; Galleri S.E International Contemporary Art in Bergen, Norway; Haus der Kunst in Munich, Germany; L.A. Louver in Los Angeles; Carl Berg Gallery in Los Angeles, and Apexart Gallery in New York. Additionally, her videos have been screened at Espace Croisé Centre d’art Contemporain in Roubaix, France; The Impakt Festival in Utrecht, Netherlands; Kunst-Werke in Berlin, Germany; The Landesmuseum Joanneum in Graz, Austria; Videoformes in Auvergne, France; Migrating Forms Film Festival in New York; Christine Koenig Gallery in Vienna, Austria; VPRO (Netherlands TV), along with other venues. Cosgrove has received grants and fellowships from The John Simon Guggenheim Foundation, The Creative Capital Foundation, The City of Los Angeles Department Of Cultural Affairs, The Center for Cultural Innovation, The Durfee Foundation, The Jerome Foundation, among other sources.