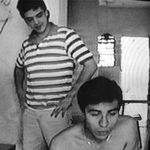 Preeminent interdisciplinary media artist, theoretician, curator, and writer RaУКl Ferrera-Balanquet (born 1958) has been called one of the pioneers of Latino/a gay and queer aesthetics. His work reflects his desire to develop an audiovisual language encompassing the violent clashes of his personal experiences against the sociological landscape of Cuba, the United States, and Mexico. He is the founder of the Latino Midwest Video Collective, which has documented and participated in many of the Chicana, gay, lesbian, and queer activities on these movements since the mid-1980s.

His work has been screened and exhibited extensively worldwide, most recently at Duke University, North Carolina; American Film Institute National Video Festival, Los Angeles; Corrientes del Sur, Toronto, Canada; Embassy Theater, Washington, D.C.; Museum of Image and Sound, SУЃo Paulo, Brazil; 1993 Whitney Biennial, New York; and Casa de la Cultura del Mayab, Yucatan, Mexico, to name a few. Ferrera-Balanquet is currently teaching at Columbia College, Chicago, and is a visiting artist at the School of the Art Institute of Chicago. He earned a BS in film studies and production and an MFA in multimedia and video art from the University of Iowa.