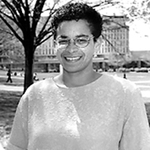 Jacqueline Goldsby’s presentation highlights the role of photography in constructing the social experience of Emmett Till’s murder. She contends that the popular emergence of photojournalism in the 1950s set an important frame for conditioning the public’s response to the case. When people recall the era, Till’s murder, and their experience of both, they invariably cite the photographs as the text they “read” to know the period’s character and the significance of the case. Her point is that the murder gripped the nation’s moral imagination because visual imagery and its rhetoric of realism was produced and consumed as evidence of the truth with which Till’s death could be interpreted.

Goldsby is currently pursuing a PhD in American studies at Yale University.