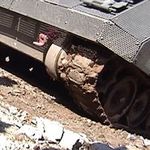 Emily Jacir (born 1970) uses video, photography, and sound to articulate the complexities of the Palestinian experience and diaspora. Jacir’s conceptual work references the inhumanity and irony of the calculated restrictions, divisions, and dispersal of the people and culture of Palestine. Her most recent project, Where We Come From, invited other Palestinians from around the world and within Palestine to share a desire or wish. She asked them, “If I could do something for you, what would it be?” The requests ranged from seemingly mundane to more obviously harrowing revealing the fear, longing, and grievance of a group of people with limited or no access at all to their nation, families, and even basic public services.