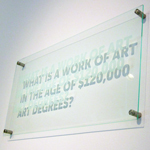 Caroline Woolard is an artist and organizer based in Brooklyn, New York who works between the solidarity economy and conceptual art. Making media, sculptures, furniture, and events, Woolard co-creates spaces for critical exchange and forgotten histories. Her practice is research-based and collaborative. Sensing that each project transforms the people who make it, Woolard opens spaces for co-production rather than toiling alone. In 2009, Woolard co-founded three organizations to support collaborative cultural production: a studio space, OurGoods.org, and Trade School.coop. These three long-term infrastructure projects support short-term artworks and involve working with conceptual artists, educators in the solidarity economy movement, and technologists in start-ups.

Understanding artists as long-term residents, Woolard works on the rise of the BFA-MFA-PhD, the Social Life of Artistic Property, footnote systems for research-based art, socially engaged failure, compensation in the arts, and incommensurability. Forthcoming writing will focus on a project at MoMA that closed last June, as well as the implications of debt and duration for social practices. From 2008-2013, Woolard was supported by the infrastructure projects mentioned above, as well as unemployment benefits, transformative organizers she met as the media coordinator for SolidarityNYC.org, a Fellowship at Eyebeam, a residency at the MacDowell Colony, Watermill, iLAND, and a major grant from the Rockefeller Cultural Innovation Fund. Woolard is currently an Artist in Residence at the Queens Museum, a lecturer at Cooper Union, the Rhode Island School of Design, and the New School. Woolard is proud to be an organizing member of BFA-MFA-PhD, New York City, To Be Determined, Trade School, and the Pedagogy Group.

Statement of Solidarity with #UMaineFuture (April 2014)