Reception and Artist Talks: A cavern. In the middle, a boiling cauldron 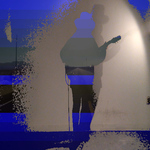 The School of Art & Art History welcomes you to join us for the reception of A cavern. In the middle, a boiling cauldron, the last in a series of three UIC MFA Thesis Exhibitions in Studio Arts, Photography, Moving Image, and New Media Arts. Artists Liz Cambron, Sara Condo, Grace Cross, and Rachel Glass will participate in a panel discussion led by filmmaker Jennifer Reeder in the Gallery 400 lecture room at 5pm.

Casting a backdrop more vivid than the white cube, an exhibition as theatre proposes an experiential connection to storytelling, filmmaking, and the ritual of performance. A free-form hex on convention, on a canon, this exhibition poses an opportunity to visually resolve and represent such complex issues as race, feminism, and cultural borders being surfaced by crossover genres. Allegorizing the everyday and the mythic in the same space, a visual narrative emerges from intersectional perspectives.

Eliciting the three weird sisters of Macbeth acts as a provocation to foreground female experience, otherness, and the unrecognized. Through art’s metamorphic activity, traces of these experiences can be transmitted into culture and open its boundaries. Witchcraft can be enacted as a form of protest, a call to action, in a ritual space that considers the future and transformation.