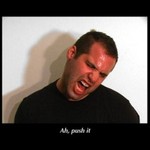 Performance Anxiety includes short works dealing with performances of cultural identity. In navigating complicated understandings of gender, race, class, sexuality, or existence in online and off-line spaces, individuals accept and internalize cultural rules or ideologies and pass, reject them (identifying such performances as a form of cultural oppression), or even scramble and combine rules and codes in personalized constructions. Performance Anxiety previously screened November 10 December 22, 2009, on French channel freebox 129 and German channel Unitymedia/Kabel BW through the organization Souvenirs from the Earth TV.

The artist s foot is anchored in a bucket of plaster. She pounds, hammers, and twists back and forth, attempting to break free of this self-imposed situation. Gilmore s work builds on 1970s feminist, endurance-based performance work, and suggests a monotonous, difficult act as a metaphor for change it takes a huge effort to make even a slight chip in the foundation.

In this fixed video portrait of the artist, viewers see Murray s face and shoulders only. The lyrics from Salt and Pepa s Push It appear at the bottom of the screen, but one cannot hear the actual song. Murray sweats heavily, enduring increasing amounts of pain until the song finally ends. The viewer can t help wondering if he enjoys it, if he s suffering, or both. Murray says his work is invested in the ideologies that are prevalent in both queer BDSM and club music regarding the potential for emancipation and freedom through physicality and endurance. If this holds true, what does his video mean for the politicized homosexual male body post-AIDS crisis that exists in a period of gay culture mainstreaming? Is there such a thing anymore as the queer body politic?

The work calls to mind lyrics from Janis Joplin s “Ball and Chain:” “something grabbed a hold of me, honey / felt to me honey like, lord, a ball and chain. In Feinstein s take on the phrase, a small disco ball swings around a square black base. The iconic disco ball suggests political connotations of 1970s disco and the cocaine wars, and the 1980s AIDS epidemic that later devastated carefree, sex-thirsty men who danced all night at clubs. With the renewed love of shiny disco balls in America, Feinstein asks viewers about their own, subjective ball and chain, suggesting the ways that this timeless image has become subjective and, perhaps, de-politicized.

All 176 episodes of Star Trek: The Next Generation are used to create a new narrative by expurgating clips of the bridge of the Starship Enterprise under attack. Repetition serves to deflate the notion of imminent attack in this fictionalized universe. Much like the political framework within Star Trek, these clips form allegories for contemporary cultural realities. These issues are questioned in an almost absurd fashion, walking a fine line between their fictional originals and injecting humor to address contemporary issues.

Interested in representations of masculinity in American culture, Stimac traveled to rural locations in the United States, asking motorists to peel out revving up their engines and hitting the pedal, which in turn leaves thick, black tire tracks on the road. The drivers perform this act, with the implication that whoever can do it hardest and longest proves that he or she is the most virile.

Yeapanis explores existentialism in virtual culture. In this work, Yeapanis s Sims character goes through her day, performing mundane tasks like cleaning the bathroom, experiencing emotional outbursts, and exercising. The game, as she suggests, parallels life meaning must be created, and each individual must carve out a place for him or herself. Identities are subjective, malleable, and formed by individuals. If the Sims game mirrors real life, one must conclude that the adage is true: life is only what you make of it.