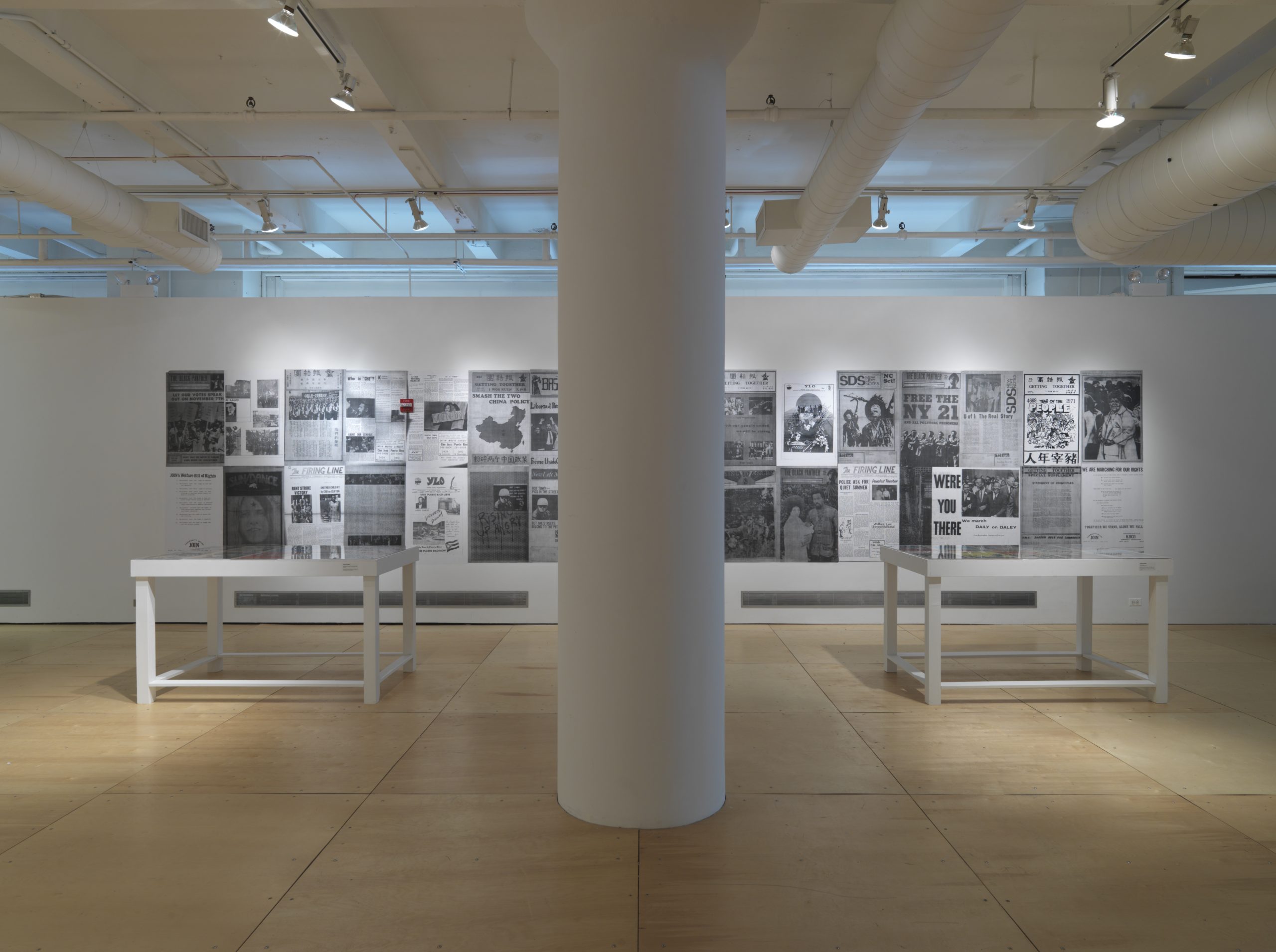 The historical material was created, produced, and distributed in the late 1960s by Chicago ’s original Rainbow Coalition, an alliance between The Black Panther Party, the Young Lords Organization, Young Patriots, and Rising Up Angry. This material is presented “in conversation” with what could be considered its contemporary counterpart – visual reproductions of the Barack Obama presidential campaign, language of the newly formed Rainbow Coalition Council of Elders, and publications from other contemporary initiatives in Chicago and beyond that re-engaged with the principal of grassroots political organizing and cross-cultural solidarity. The movements share a common idea that despite our dire collective circumstances, a spirit of hope and optimism can result and act as a unifying, mobilizing force.

Of interest both for its artistic content and its historical connotations, the Rainbow Coalition material presented in Paper Trail serves a purpose more contextualizing than nostalgic in its juxtaposition with the more contemporary displays. As curators Nancy Zastudil and Julia Hamilton wrote:

“The exhibition provides a snapshot of U.S. underground militant media in its heyday, when it was not only the most effective way of disseminating information, but also a vehicle to usher in an exciting renaissance of creativity. As the colorful graphics of the Chicago Seed and Emory Douglas ’s illustrations in the Black Community News Service suggest, conscious attention to the mechanisms of advertising helped create strong visual metaphors and allowed the publications to be an active central location of the resistance struggle. The bold graphics gave life to ideas that were too radical for the ‘real world. ’ For example, equating the caricature of ‘the pig ’ with an image of a cop allowed those being oppressed to exercise symbolic power over the authorities.”

This exhibition was organized by Zastudil and Hamilton, with the support and participation of Kathleen Cleaver, Michael James, Bill Jennings, Cha Cha Jimenez, Jaqueline Lazu, among countless others.

As participants in those organizations that created the original Rainbow Coalition, we gather in Chicago to rededicate ourselves to its principles of solidarity and to form a Council of Elders.

We are joining in a loose council governed by consensus so we may amplify the wisdom and experience we have accumulated over forty years of fighting against racism, imperialism, and violence, and to serve as a resource to organizational efforts within the communities of which we are a part.

This Council we are forming will enhance our collective and individual abilities to advise and to support ongoing struggles among poor and working people, immigrants, students, and all progressive people seeking political change to gain respect for fundamental human rights, including concerns with discrimination on the grounds of age, disability, and gender; and to end racist, militarist, and homophobic injustice, and to bring about peace.

We affirm our consensus on the fundamental values that brought us together: self-determination for oppressed and colonized peoples, including the independence of the colony of Puerto Rico; we support work that implements economic, environmental, and social justice in our communities and that challenges the corporate devastation of our culture, and all efforts to end the violence directed against our communities by police, courts, and rampant imprisonment.

We reaffirm the basic principles that informed the original platforms of the organizations constituting the Rainbow Coalition, which included the Black Panther Party, the Young Lords, the Young Patriots, Rising Up Angry, I Wor Kuen, and the American Indian Movement.

We recognize the dangerous levels that political and cultural repression as well as radical economic inequality have reached in this post-9/11 United States, and join in love, hope, and defiance to bring another world into existence.

We want self-determination for Puerto Ricans–liberation of the island and inside the United States.

We want self-determination for all Latinos.

We want liberation of all third-world people.

We are revolutionary nationalists and oppose racism.

We want equality for women. Down with machismo and male chauvinism.

We want community control of our institutions and land.

We want a true education of our Creole culture and Spanish language.

We oppose capitalists and alliances with traitors.

We oppose the Amerikkkan military.

We want freedom for all political prisoners.

We believe armed self-defense and armed struggle are the only means to liberation.

We want a socialist society.

We want power to determine the destiny of our black and oppressed communities’ education that teaches us our true history and our role in the present-day society.

We want completely free health care for all black and oppressed people.

We want an immediate end to police brutality and murder of black people, other people of color, and all oppressed people inside the United States.

We want an immediate end to all wars of aggression.

We want full employment for our people.
We want an end to the robbery by the capitalists of our Black Community.

We want decent housing, fit for the shelter of human beings.

We want decent education for our people that exposes the true nature of this decadent American society.

We want freedom for all black and oppressed people now held in U. S. Federal, state, county, city and military prisons and jails. We want trials by a jury of peers for all persons charged with so-called crimes under the laws of this country.

We demand freedom. We demand the power to determine the destiny of our oppressed white community.

We demand full employment of oppressed white people, and that the means of production should be placed in the hands of the people.

We demand an end to the robbery by the capitalists of our oppressed white community: we demand that they do not make a profit on things we need for survival.

We demand decent and adequate housing, fit for the shelter of human beings, regardless of our income.

We demand education that exposes the true nature of this decadent American society; that teaches us our true history, that teaches us cooperation rather then competition.

We demand that all oppressed white people be exempt from military service.

We demand an immediate end to police brutality and murder of oppressed white people, and that the people of our community control the police.

We demand freedom for all oppressed white people held in federal, state, county and city prisons, and that all our people be tried by a jury of their peers or from their communities.

We demand the end of the rape of our land by the corporations and monopoly farmers, and the land be returned to the people to meet their basic needs.

We demand an end to racism, and the inequality of the sexes, as tools of capitalism to divide the people.

Nancy Zastudil
is an itinerant curator who emphasizes an expanded notion of curating, focusing on collective art practices that operate in the service of revolution and social progress. She is co-founder of PLAND (Practice Liberating Art through Necessary Dislocation), an off-the-grid residency program that supports the development of experimental and research-based projects in the context of the Taos mesa; the Taos Coordinator for ISEA2012 Albuquerque: Machine Wilderness, organized by 516ARTS; Managing Editor of 127 Prince, an online art and social practice journal; New Mexico Regional Editor for Temporary Art Review, a platform for contemporary art criticism that focuses on alternative spaces and critical exchange among disparate art communities, and she curates exhibitions nationwide. She held the position of Associate Director of the University of Houston’s Cynthia Woods Mitchell Center for the Arts from Fall 2007–Spring 2010; co-edited On the Banks of Bayou City: The Center for Land Use Interpretation in Houston (March 2009); and has published interviews and reviews in artlies.org, Proximity magazine, spot, …might be good, and Curating Now. Nancy holds a BFA in Painting and Drawing from The Ohio State University and a Master of Arts in Curatorial Practice from California College of the Arts.

Paper Trail is supported by the College of Architecture and the Arts, University of Illinois at Chicago, and a grant from the Illinois Arts Council, a state agency.

Paper Trail is an exhibition of visual imagery that documents the history and creative output of Chicago ’s original Rainbow Coalition. Also included are photographs of the Rainbow Coalition in its early days when it included JOIN, a Chicago-based community organization comprised of activists who would later go on to form Students for a Democratic Society (SDS) and Rising Up Angry. The project showcases the ways that the organizations, while situated in very disparate communities, applied remarkably similar forms of rhetoric and graphic style to visually articulate their revolutionary agendas and concerns.

The Rainbow Coalition was an alliance between the Black Panthers, The Young Lords, the Young Patriots, and Rising Up Angry that was developed in late 1969. Fred Hampton initiated the coalition soon after he attended “A United Front Against Fascism,” a three-day conference that the Panthers organized in 1969 in Oakland, CA, devoted to the concept of inter-communalism. The Panthers had begun to believe in the concept of the motley crew—that people from diverse cultures and nationalities, brought together by virtue of their marginality, could be a profoundly powerful force for political change. With this idea at their core, the Rainbow Coalition became a celebration of the multitude: of difference and of connection. Looking to the Panthers for inspiration, each organization affiliated with the Rainbow Coalition was likewise incredibly strategic concerning the images they used to celebrate their own ethnic pride.

The exhibition provides a snapshot of U.S. underground militant media in its heyday, when it was not only the most effective way of disseminating information, but also a vehicle to usher in an exciting renaissance of creativity. As the colorful graphics of The Chicago Seed and Emory Douglas ’s illustrations in the Black Community News Service suggest, conscious attention to the mechanisms of advertising helped create strong visual metaphors and allowed the publications to be an active central location of the resistance struggle. The bold graphics gave life to ideas that were too radical for the “real world.” For example, equating the caricature of “the pig” with an image of a cop allowed those being oppressed to exercise symbolic power over the authorities.

Paper Trail also offers the official “statement of purpose” for the Rainbow Coalition Council of Elders, formed in 2007 by many of the original members of the Rainbow Coalition to reengage and revise the original aims of the movement. Finally, selections of the graphic imagery crafted during the Barack Obama presidential campaign are displayed on a monitor. The energy and fervor with which citizens distributed Shepard Fairey ’s iconic image of Obama is impressive, as is the passionate, collective ownership with which that image has been further appropriated and even distorted.

Ultimately, the goal of Paper Trail is not nostalgic. But, rather, the exhibition asserts that reconnecting with and “re-presenting” this material with the benefit of some historical distance allows us to reexamine the strategies and goals of this graphic work. Causes against which those in the original Rainbow Coalition fought—specifically inadequate access to medical care and childcare, exploitation of the working poor, the forced relocation of low-income families and minorities under the guise of “urban renewal”—remain concerns forty years later. For instance, we cannot ignore that the near west side neighborhood of Chicago, currently under massive transformation by rapid development in both private and public sectors, and the location of UIC and this exhibition, adds a context of poignancy and urgency to the need for mobilization.

Paper Trail is by no means exhaustive and is not meant as a one-to-one comparison or mapping between the historic and the contemporary. Paper Trail is a gathering of parallels and divergences, proposed as a fragment from a much larger ongoing text.

This essay was distributed in the gallery during the run of the exhibition.