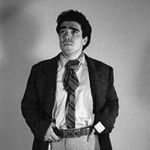 Mike Smith (born 1951) is a video and performance artist who invokes the routines of popular comedy to articulate the banality and hype of mass consumer culture and the isolation of those whose inner lives are defined by it. In a series of videos, performances, and installations, which he has produced since the late 1970s, Smith chronicles the trivial dreams and adventures of his alter ego, the bland, deadpan “Mike,” a postmodern “everyman” who believes everything and understands nothing in his media-saturated world. The tragic-comic tales of this underdog hero are performed by Smith within the parodic context of pop cultural formats: sitcoms, music videos, TV ads, variety, and game shows.

He is widely recognized as one of the first performance artists to break with the non-theatrical, literalist norms of the mid-70s. Smith has received grants from the Guggenheim Foundation and the National Endowment for the Arts, among other organizations. His videotapes and installations have been exhibited at numerous venues, including Leo Castelli Gallery, New York; Museum of Modern Art, New York; the Whitney Museum of American Art, New York; Stedelijk Museum, Amsterdam; Long Beach Museum of Art, California; the Centre Georges Pompidou, Paris; Institute of Contemporary Art, Boston; Documenta 8, Kassel, Germany; and the New Museum of Contemporary Art, New York.