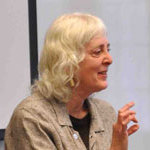 Photographic practices and theories of the gaze come together to consider photographs of a gay-rights rally held in Chicago in April of 1970. Few photographs were made of this rally and none of the existing ones were published for decades. The photographs appear to describe fluid boundaries between the roles of onlookers, bystanders, and participants, and pose questions about the relationships between the people playing these roles. Photographic practices invoke questions like to what extent is photography understood as a technology of the bystander or a tool of the observer. Moreover, approaches to the reading of these photographs come into question. This talk is part of a larger study of the concept of the witness, as well as a prelude to a study of the rally itself.

Margaret Olin is a senior research scholar with appointments at Yale Divinity School as well as the Department of Religious Studies, the Program in Judaic Studies, and the Department of the History of Art. From 1986, until her arrival at Yale in 2009, she was a professor at the School of the Art Institute of Chicago in the departments of Art History, Theory and Criticism, and Visual and Critical Studies. She is the author most recently of Touching Photographs (University of Chicago Press, 2012). She is also co-editor, with Robert S. Nelson, of Monuments and Memory, Made and Unmade (University of Chicago Press, 2003) and, with Steven Fine, Vivian B. Mann, and Maya Balakirsky-Katz, co-edits the journal Images: A Journal of Jewish Art and Visual Culture. In 2012, she curated the multi-venue exhibition Shaping Community: Poetics and Politics of the Eruv at Yale University, to which she contributed the photographic installations Urban Bricolage and No Carry Zone.

This event is organized by the University of Illinois at Chicago Art History department and co-sponsored by the Gender and Sexuality Center and the Gender and Women’s Studies department at UIC. This is the first in a series featuring Chicago-area art historians.