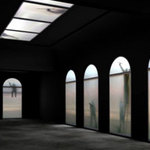 Krzysztof Wodiczko (born 1943) has created more than seventy large-scale slide and video projections of politically charged images on architectural fa ades and monuments worldwide. In 1996, he added sound and motion to the projections, and began to collaborate with communities around chosen projection sites giving voice to the concerns of heretofore marginalized and silent citizens who live in the monuments shadows. Wodiczko challenges the silent, stark monumentality of buildings, activating them in an examination of notions of human rights, democracy, and truths about the violence, alienation, and inhumanity that underlie countless aspects of social interaction in present-day society. Wodiczko has also developed instruments to facilitate survival, communication, and healing for homeless people and immigrants; these therapeutic devices address physical disability as well as economic hardship, emotional trauma, and psychological distress.

Wodiczko was born in Warsaw, Poland, and lives and works in New York and Cambridge, Massachusetts. He currently heads the Interrogative Design Group, and is Director of the Center for Art, Culture, and Technology, at the Massachusetts Institute of Technology. His work has appeared in many international exhibitions, including the Bienal de S o Paulo (1965, 1967, 1985); Documenta (1977, 1987); the Venice Biennale (1986, 2000); and the Whitney Biennial (2000). Wodiczko received the 1999 Hiroshima Art Prize for his contribution as an artist to world peace, and the 2004 College Art Association Award for Distinguished Body of Work.