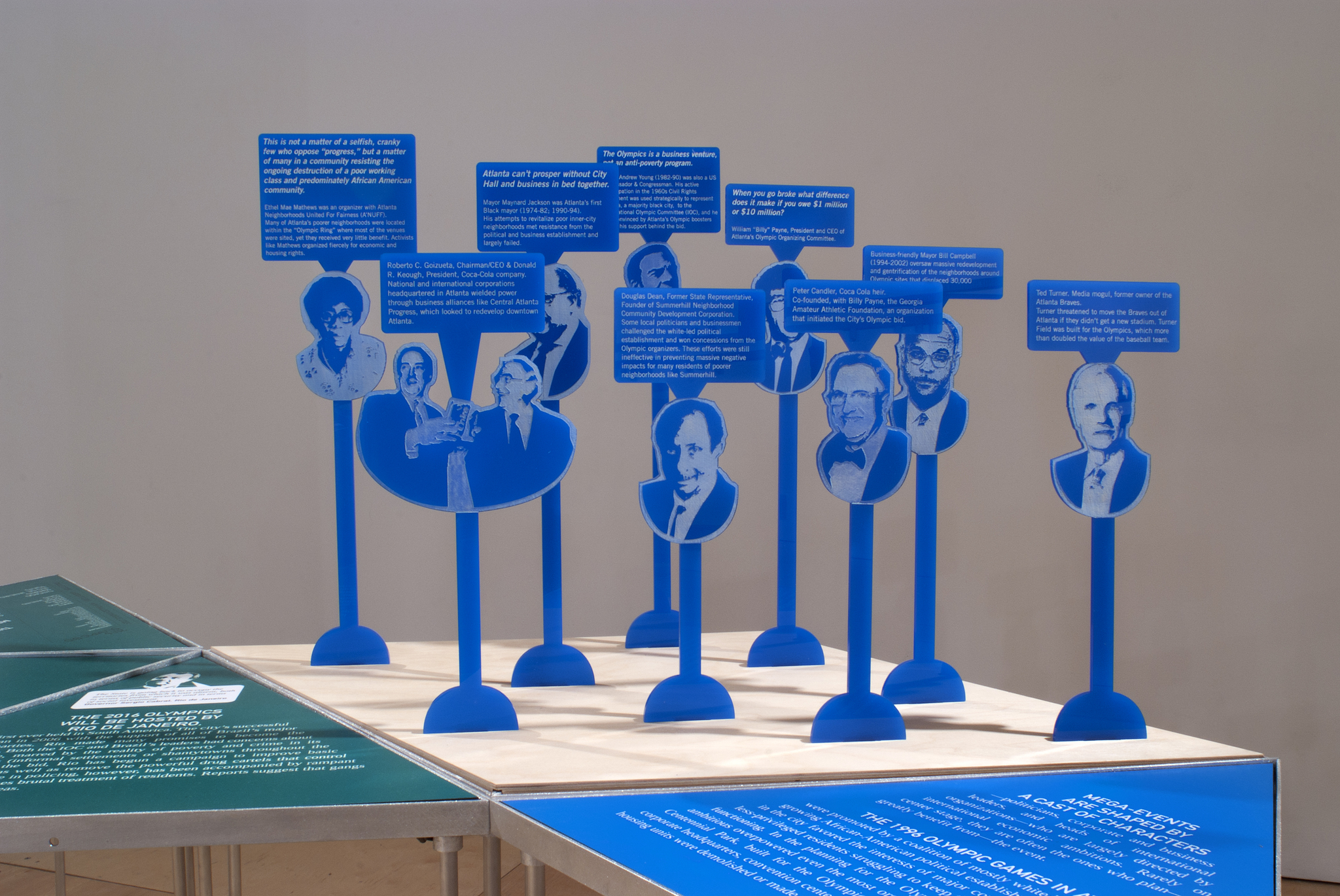 Global Cities, Model Worlds is an exhibition that explores the spatial and social impacts of “mega events,” such as the Olympics and World ’s Fairs. The host cities of these international spectacles seek to transform themselves into “global cities” through planning, architecture, and ideology. Locally, these events pave the way for redevelopment projects that can create new public resources such as parks, stadiums, or transportation infrastructure, but often result in significant displacement of residents or industry, reinforcing existing inequalities.

Global Cities, Model Worlds is supported by the Graham Foundation for Advanced Studies in the Fine Arts; the Miller Gallery and the STUDIO for Creative Inquiry at Carnegie Mellon University; the UIC Innovation Center; the College of Architecture and the Arts, University of Illinois at Chicago; and a grant from the Illinois Arts Council, a state agency.

Ryan Griffis (b. 1974, northern Florida) is an artist currently teaching new media art at the University of Illinois at Urbana-Champaign. His writing has appeared in publications such as New Art Examiner, RePublic, ArtUS, Artlink, Rhizome, and Furtherfield. He has curated exhibitions for the School of the Art Institute of Chicago, Turbulence.org, Greenmuseum.org, and George Mason University on themes that include the politics of genetic technologies, energy consumption, and artistic forays into agriculture. Under the name Temporary Travel Office, Ryan creates work and publications that attempt to use tourism as an opportunity for critical public encounters. These encounters include public tours of urban parking lots, speculative proposals for parks and hotels, and most recently, a series of experimental guidebooks. These works have been presented in various institutional forums, including the Bureau for Open Culture (Columbus College of Art & Design), AREA Chicago, the Center for Land Use Interpretation, and Los Angeles Contemporary Exhibitions.

Lize Mogel (b. New York City) is an interdisciplinary artist who works at the interstices of art and cultural geography. She creates and disseminates counter-cartography—maps and mappings that produce new understandings of social and political issues. Her work connects the real history of and collective imaginary about specific places to larger narratives of global economies. She has mapped public parks in Los Angeles, future territorial disputes in the Arctic, and wastewater economies in New York. She is co-editor of the book/map collection An Atlas of Radical Cartography and co-curator of the traveling exhibition An Atlas, exhibited at Gallery 400 in 2007. Exhibitions include the Gwangju (South Korea) and Sharjah (U.A.E.) Biennials, PS1 (New York), Casco (Utrecht), and Experimental Geography (touring). She has lectured about her work at numerous venues internationally. She has received grants from the Jerome Foundation, the Graham Foundation, the LEF Foundation, and the Danish Arts Council.

Sarah Ross (b.1976, Greenville, North Carolina) is an artist who works in video, sculpture, and photography. Her projects use narrative and the body to address spatial concerns as they relate to access, class, anxiety, and activism. Ross has co-curated exhibitions at SPACES Gallery, Cleveland; Sea and Space Explorations, Los Angeles; and PS 122, New York. She works collaboratively with artists and neighborhood groups to produce public projects. She teaches at the School of the Art Institute of Chicago and at an Illinois state prison. Ross is the recipient of grants from the Graham Foundation, the University of California Institute for Research in the Arts, and the Illinois Arts Council. She has exhibited work at the Armory, Pasadena, CA; Gallery 727, Los Angeles; PS 122, New York; Columbia College, Chicago; Pinkard Gallery, Baltimore; META Cultural Foundation, Romania; and the Canadian Center for Architecture, Montreal.