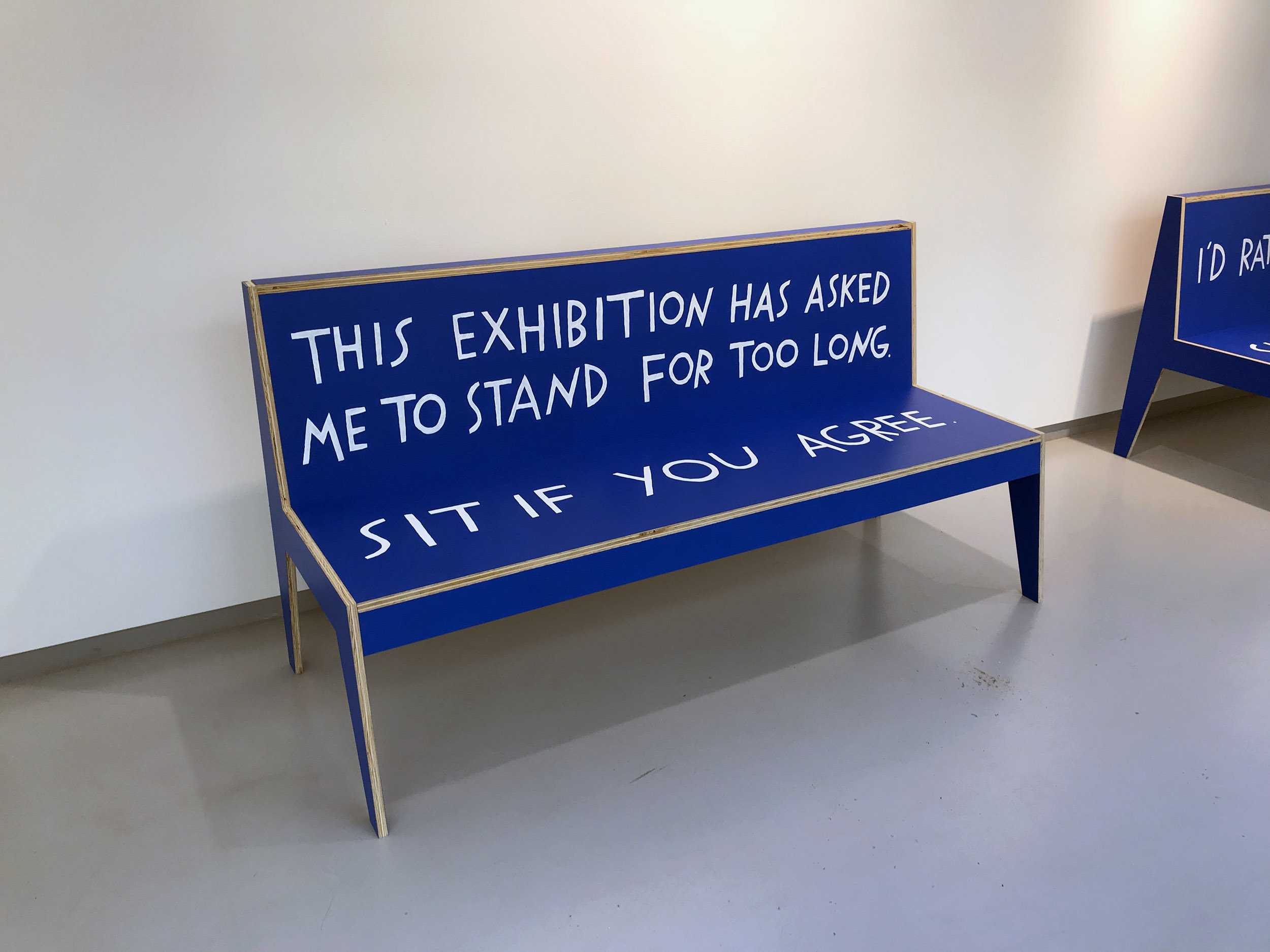 Crip* is a group exhibition featuring artists who address disability and intersectional thinking. Some of the artists identify as disabled; some do not, but each has a relationship to (at least one) non-normative identity. Often artists are expected to “perform” their identities for the art world through imaging themselves. On one hand this diversifies the art world; but on another hand this, in fact, pigeonholes artists with non-normative identities, strengthens the distinction between normative and non-normative, and reduces the rich and complex knowledge gained through lived experience to a more flattened and singular interpretation.

The artists in Crip* are attuned to the concepts that exist beyond the reach of simplified identity distinctions or interpretations. For example, Emilie Gossiaux’s work is informed by her hearing loss and vision loss, but what drives her work is a broad interest and deep understanding of communication, interdependence, and the connection between sense and memory. Her sensory ability provides her with a unique vantage point, but is not limiting, and Gossiaux is not interested in producing work that can be reduced to simply imagining her specific sensory composition.

Alison O’Daniel’s expansive project The Tuba Thieves utilizes O’Daniel’s understanding of sound both through her access to it and through her awareness of its absence due to her hearing loss. Scene 55 The Plants Are Protected beautifully relies on the generative space of translation. In fact, O’Daniel created her cinematic visuals based on sound scores produced by five different composers; the Deaf sound artist Christine Sun Kim produced the sound score for scene 55. Through O’Daniel’s project we are able to reconsider the rich and liminal space formed between absence and presence.

Crip* references Crip Theory, which was coined by professor, writer, and theorist Robert McRuer in his book Crip Theory: Cultural Signs of Queerness and Disability, published in 2006. McRuer describes how compulsory heteronormativity and compulsory able-bodiedness rely on non-normal bodies and identities to exist. Normativity is essentially held in place, and defined by, all of the things that “it is not.” Non-normative identities are shaped around and against normativity and are required to remain non-normative in order to preserve normative continuity. Where earlier disability studies theorized and constructed a somewhat singular disabled identity, Crip Theory has sought to utilize productive aspects of that identity while resisting its limitations, primarily to forge connections and networks across multiple identity distinctions. Similarly, the artists in Crip* take on and push against rigid identity distinctions by presenting complicated works that resist reduction. It is impossible to interpret a work like Brontez Purnell’s Pillow Fight without taking into account his identities as a Black person, as a gay man, as a person who is HIV positive, as well as the gentrification that plagues San Francisco. All parts of Pillow Fight are interconnected and resist singular and incomplete approaches. Crip* also includes work by Liz Barr, Shannon Finnegan, Max Guy, Christopher Robert Jones, Carly Mandel, Darrin Martin, Berenice Olmedo, and Carmen Papalia & Heather Kai Smith.

The artists in Crip* utilize a new vocabulary to articulate variations of ability and experience. They delineate between the empowering and useful aspects of identity that facilitate dialogue and the constraining or limiting aspects that extinguish it. The exhibition thus fractures and reassembles how we think about identity within the framework of our culture. Reverberations between the works ask us to redefine and question our own ingrained thinking about what it means to move through a world that both rejects and capitalizes on experiences that are not perceived as normal.

Exhibition material can be found in plain text and in audio recordings here or at go.uic.edu/CripAccess.