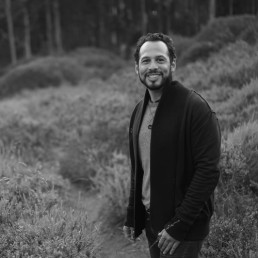 Harold Mendez, one of six UIC-affiliated artists participating in the Whitney Biennial

Five University of Illinois at Chicago alumni and a current visiting assistant professor of art have recently been chosen to participate in one of the most important art exhibitions for American art. The artists were selected for the 2017 Whitney Biennial at the Whitney Museum of American Art in New York City, and their pieces will be on display in the spring. The formation of self and the individual’s place in a turbulent society are among the key themes reflected in the work of the 63 artists selected for exhibition, say Whitney officials. The artists with ties to UIC include Basma Alsharif, who received her MFA in 2007; Mary Helena Clark, who received her MFA in 2012; Dani Leventhal, who received her MFA in 2003; Harold Mendez, who received his MFA in 2007; Irena Haiduk, who received her MFA in 2011; and Cauleen Smith, current visiting assistant professor of art. Lisa Yun Lee, director of UIC’s School of Art and Art History, said the theme of the 2017 exhibition coincides with UIC’s role as a public, urban university. “We were absolutely thrilled to hear about the selection of so many UIC alumni and current faculty for this year’s Whitney Biennial,” Lee said.  “These artists reflect some of the brilliant diversity of UIC’s student body.  Not only do we embrace the curator’s commitment to new, influential and provocative art, this year’s focus on socially relevant artwork that addresses themes of social struggle, connection to place, and personal identity are all very much part of the material reality and context of art-making at our urban, public research university.” The exhibition’s featured artists range from emerging to well-established individuals working in painting, sculpture, drawing, installation, film and video, photography, activism, performance, music, and even video-game design. The Whitney Biennial is the longest running survey of contemporary art in the U.S., with a history of exhibiting the most promising and influential artists and provoking lively debate. The 2017 Biennial is the museum’s 78th in a continuous series of annual and biennial exhibitions begun in 1932 by Gertrude Vanderbilt Whitney. The 2017 exhibition will be the first to be held in the Whitney’s new New York City home, and the largest in its history in terms of gallery space. For more information about the exhibition, which will be on view Mar. 17 – June 11, visit the Whitney Biennial website.   -Carlos Sadovi 11-22-2016