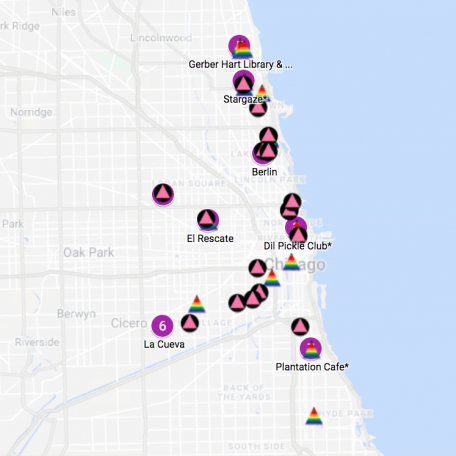 Specifically designed for the Chicago exhibitions, Mapping Queer Chicago: Past and Present, presents Chicago as a city with a rich queer history. It aims to decentralize queer history beyond the established queer enclaves of “Boystown” and position it with the Latinx and Black queer experience in the city of Chicago.

Queer as German Folk takes the fiftieth anniversary of Stonewall as an opportunity to outline the current state of discourse on queer emancipation against the backdrop of the past half-century. With a focus on adjusting historical perspectives and questioning the dominance and hegemony of the traditional cis-male narrative, the exhibition will be in the form of a hands-on deconstructed archive that visitors can browse at their own pace.

The exhibition will attempt to draw a picture that is historically more comprehensive, which also means not losing sight of the growth of the homosexual emancipation movement in the East Germany. Even though the striking milestones of German-American rainbow friendship may be well known, the collection will tap into specifically marginalized and as yet under-researched traditions, for example with regard to the Black German Movement or the history of the trans movement.