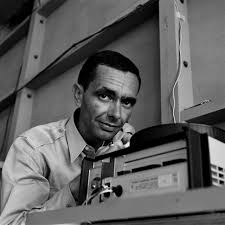 Ken Isaacs, 89, passed away peacefully on June 8, 2016, in Granger, Indiana, where he resided for the past 14 years. He was a professor of architecture at the School of Architecture for 30 years and the husband of Sara Isaacs, a long-time department assistant in the School of Art and Design. Isaacs, an innovative architect and designer, gained worldwide attention and celebrity in 1962 with his design of the “Knowledge Box”, a multi-media immersion chamber.  He challenged conventional architectural concepts in housing with his radical design of the “Micro House” and his “Living Structures” over the course of three decades, pioneering what would become the “tiny house” movement.   Isaacs and the “Knowledge Box” appeared on the cover of Life Magazine in September 1962, wherein he was included among the “red hot hundred”—the young leaders of the “Take-Over Generation.” His projects have been published in numerous magazines, books, and scholarly journals, and Johnny Carson, Dave Garroway, Hugh Downs and Bob Faw interviewed him on network television.  He was a contributing editor to -Popular Science Magazine- throughout the 1960s and published his own design manual How To Build Your Own Living Structures (1974). Besides his wife Sara, Isaacs is survived by his son Joshua of Chicago, Illinois; his sister and brother-in-law Joan and David Trushin of West Chicago, Illinois; and his mother-in-law Elaine Kernodle of South Bend, Indiana. Ken Isaacs was born on February 7, 1927 in Peoria, Illinois, the only son of Henry Wellie Isaacs, a farmer, and his wife Marie Neville.  After graduation with honors from Cranbrook Academy of Art in 1954, he moved to New York to establish his own design firm.  While maintaining his New York office, he was appointed to head the Design School at Cranbrook.  Here, he created the Matrix Study Course, an introductory design curriculum that was used until 1980. He also held teaching posts at RISDE and IIT, and was named Professor Emeritus after teaching for more than 30 years in the School of Architecture at the University of Illinois at Chicago. In a 2007 interview, Isaacs stated:  “I was always a builder.  I would save my money and buy lumber and metal and actually build these projects like the Living Structures.  And when you build things, it changes you.” A reconstruction of the “Knowledge Box” and some of his other projects were included in both an exhibition at the School of the Art Institute of Chicago’s Sullivan Galleries in 2009, and at the Walker Art Center in Minneapolis in 2015.   His “Knowledge Box” will be exhibited at the Cranbrook Art Museum, Bloomfield Hills, Michigan, June 18 through October 7, 2016, and will then travel to the University of California, Berkeley Art Museum and Pacific Film Archive, February 8 – May 21, 2017. In lieu of flowers, donations in Ken Isaac’s memory may be made to the Cleveland Clinic/Philanthropy Institute, P.O. Box 931517, Cleveland, OH 44193-1655.